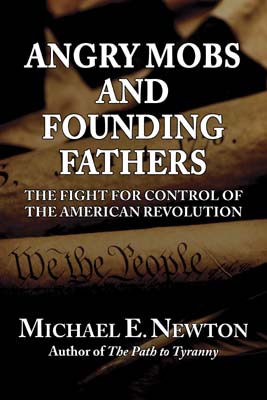 Galveston County Daily News: The book frequently is thought-provoking. Although Newton makes no explicit link, readers will be struck by the parallels between the relationship of the American colonists of 1750 through 1770 with the British Parliament and that of average Americans with today’s political class… If you read it, you will find it rewarding.

Todd Kinsey: Michael E. Newton’s new book Angry Mobs and Founding Fathers is a must read for anyone interested in America’s founding and should be part of every patriot’s library. His book is clear, concise, well documented, and chock-full of quotes from the founding fathers…

What Would The Founders Think? Michael Newton’s latest book, Angry Mobs and Founding Fathers, is a densely packed, meticulously researched, compendium of  historical knowledge… Newton explores the motivations of the “angry mobs” and Founding Fathers, from the colonial period, through the American Revolution, the failure of the Articles of Confederation, the Constitutional Convention,  and Ratification.  Newton clearly depicts the ebb and flow of power and participation between these two groups.

Citizen Authority: Michael Newton provides meticulous, fascinating details of how angry mobs were pivotal in the revolt against Britain but then how the new American government struggled to control those same mobs after independence had been won… I would highly recommend this book to any fan of American Colonial, Revolutionary and Constitutional history.